Julian Porter, Q.C. has practised litigation exclusively since his call to the Bar in 1964 and is recognized by the Law Society of Upper Canada as a specialist in civil litigation. He now practices as independent counsel. He has appeared before all levels of Court, in every kind of civil, commercial and criminal proceeding. He acts as defence counsel for professionals and he is fond of appearing before juries.

In his career he has done some interesting things. He has examined a member of the Milosovic cabinet in Moscow. He acted with two counsel in Canada’s last murder trial which resulted in a hanging. He was sent to make the final appeal to the Minister of Justice – it failed. He acted in numerous obscenity cases; he persuaded a Court that his wife’s publishing house had not breached L. Ron Hubbard’s copyright. On behalf of Peter Newman and Jack McClelland, he convinced a Judge to allow felt pens to be used by the publisher to eliminate an offending sentence in a book rather than withdraw the publication.

He represented the OPP in a seven week bilingual libel jury trial in Ottawa. That case, Cusson v. The Ottawa Citizen et al went to the Court of Appeal and its decision was the most important in Canadian jurisprudence for 25 years. He also received the highest award for a slander case before a jury in Cobourg under the Simplified Rules.

He successfully represented Maclean’s Magazine in highly publicized Human Rights prosecutions federally and in the provinces of British Columbia and Ontario.

He has defended many of Canada’s leading writers, publishers and magazines in libel matters and has acted for a large number of plaintiffs suing newspapers and television stations. Lexpert has, for a number of years, recognized him as leading counsel in the law of defamation and since 2008 Lexpert has ranked him as “Most Frequently Recommended”. He also continues to be included in The Best Lawyers in Canada. He is currently engaged in a number of libel cases.

Mr. Porter is co-author of the law text entitled Canadian Libel Practice (Butterworths – 1986). His lecture on cross-examination is in video format for Canada Law Book. He has given a three-hour demonstration on cross-examination for Law Society lectures throughout Ontario. He is a Bencher of the Law Society of Upper Canada and a Fellow of the American College of Trial Lawyers. 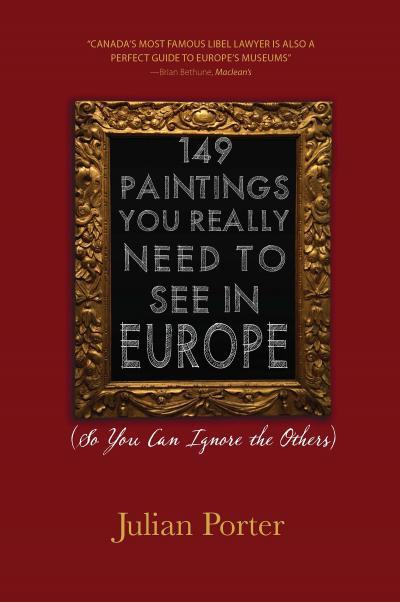 He has a passion for art and spent seven years in Europe as a student tour guide. He is the author of 149 Paintings You Really Need to See in Europe (So You Can Ignore the Others) which was released in October, 2013.