Living on Toronto Island around boats and sailing, Paul Henderson learned the basics of the sport, as well as the values and importance of sport early in life. He became a very active competitor in sailing, winning medals at World, North American and USA National Championships. He has the record of having competed in all the Canadian Olympic Sailing Trials from 1948 to 1984; having represented Canada at three Olympic Games: 1964, 1968 and 1972; and would have in 1980 but for the Olympic boycott against the Soviet Union.

Known as “The Pope of Sailing“, Paul Henderson is a devoted sailor, 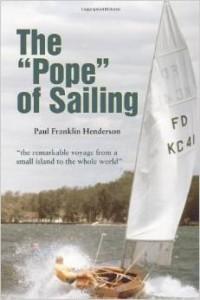 who for over 30 years was very active in the ISAF, the international body that governs the sport of sailing, including from 1994 to 2004 as its first non-European President. From 2000 to 2004, he was also an IOC member on the Sports and Environmental Commission, the Anti-doping Agency and the Women and Sport Commission. During his ISAF presidency sailing went from 18% women athletes in Atlanta 1996 to 35% in Athens 2004.

Paul dedicated five years as a volunteer in his leadership of the Toronto Olympic Bid to host the 1996 Olympic Games and was also consulted on the 2008 Toronto and 2010 Vancouver bids. In 2001, he was inducted into the Canadian Olympic Hall of Fame and has been the ambassador of the Vintage Yachting Games since 2011.

A leader who was never afraid to make a tough or unpopular decision when issues needed to be resolved, Paul has always defended fair racing and upheld the integrity of the sport and has never compromised those values. Even when under pressure from Olympic Games officials, Paul stuck to his simple principle that above all else, the racing has to remain fair. Paul has also been sensitive to protecting the interests of “grass roots” sailing and did not allow the sport to become dominated by commercial interests. Over the years, he has fought hard to keep the sport representative of the majority of sailors rather than the few at the top.

Join fellow Whiffers and their guests on January 27th to hear a few of his great sailing yarns and considered thoughts on the upcoming Toronto PanAm games.

Please RSVP (and update your response later if needed) using your original Celebrations email invitation or the on-line invitation for the event. All changes to your RSVP response must be made before noon, Monday, January 26th.