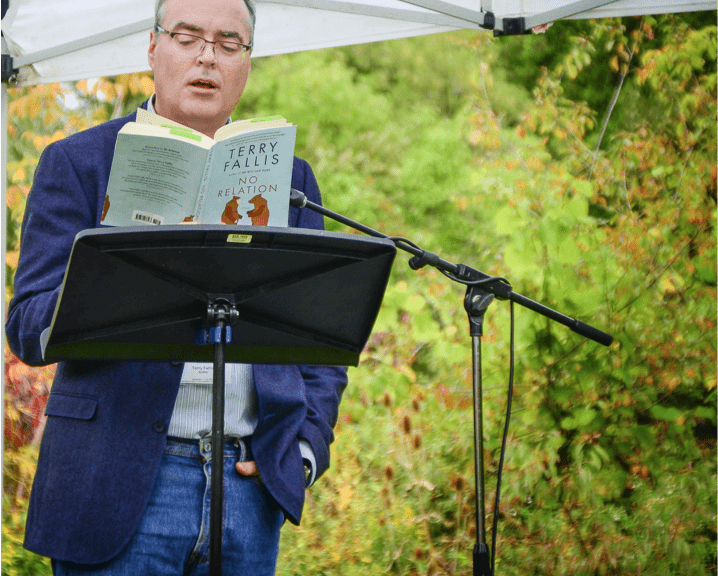 “Terry Fallis writes just about the tidiest romantic comedic novels you can find on earth, let alone in Canada.” The Globe and Mail

A two-time winner of the Stephen Leacock Medal for Humour, Terry Fallis is the award-winning author of seven national bestsellers, including his most recent, Albatross (2019), all published by McClelland & Stewart (M&S).

His debut novel, The Best Laid Plans (2008),won the 2008 Stephen Leacock Medal for Humour and was crowned the 2011 winner of CBC Canada Reads as the “essential Canadian novel of the decade.“ In January 2014, CBC aired a six-part television miniseries based on The Best Laid Plans earning very positive reviews. In September 2015, it debuted as a stage musical in Vancouver, produced by Touchstone Theatre and Patrick Street Productions. The High Road (2010) was published in September 2010 and was a finalist for the 2011 Stephen Leacock Medal for Humour. Terry’s third novel, Up and Down (2012), was released in September 2012. It debuted on the Globe and Mail bestsellers list, was a finalist for the 2013 Leacock Medal, and won the 2013 Ontario Library Association Evergreen Award. Terry’s fourth novel, No Relation (2014), hit bookstores in May 2014, opened on the Globe and Mail bestsellers list, and won the 2015 Leacock Medal. M&S published Terry’s fifth novel, Poles Apart (2015), in October 2015, opening on several bestsellers lists including the Globe and Mail’s. It was a finalist for the 2016 Leacock Medal. One Brother Shy (2017) was published in May 2017 and was an instant bestseller. Three days after his seventh novel, Albatross, was published, it broke onto the Globe and Mail bestsellers list.

In June, 2013, the Canadian Booksellers Association presented Terry with the Libris Award for Author of the Year.

Terry Fallis earned a Bachelor of Engineering degree from McMaster University (1983) where he became engulfed in university politics and somehow persuaded the undergraduates to elect him President of the Students Union.

After graduation, he turned his back on engineering and joined future Prime Minister Jean Chretien’s full time staff for the 1984 federal Liberal Leadership campaign.

He served on the political staff of the Liberal Minister of State for Youth, the Honourable Jean Lapierre, in the short-lived cabinet of Prime Minister John Turner. He stayed with Lapierre as his Legislative Assistant in opposition (1984-85) following the landslide victory of Brian Mulroney and the Progressive Conservative Party.

In 1995, he co-founded Thornley Fallis with Joe Thornley, a full service communications consulting agency with offices in Ottawa and Toronto. Terry also created and co-hosted more than 200 episodes of the popular business podcast, Inside PR.

A homebuilt hovercraft plays a supporting role in The Best Laid Plans. Terry has always had a thing for hovercrafts.

Terry is a sought-after speaker, sits on a number of boards, and lives in Toronto with his wife and two sons.

Learn more about Terry: https://terryfallis.com/. Terry Fallis can be reached at tfallis@gmail.com.